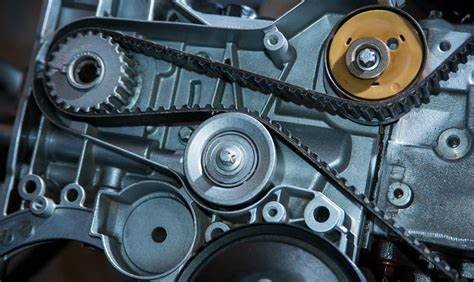 Did you know that overheated engines and oil leaks are the two biggest causes of timing belt failures? Your vehicles internal combustion engine uses either a timing belt or timing chain to synchronize the rotation of the crankshaft and camshaft(s). If the timing belt is worn or broken, it will not properly open and close the engine’s valve during each cylinder’s intake and exhaust strokes. A timing belt problem will cause the valves and pistons to run out of sync, potentially causing backfires or seizing your engine altogether. Timing belts are difficult to inspect and are often overlooked by most customers. These belts are similar to engine drive belts which drives components such as alternators or a/c compressors. Timing belts are of heavy-duty construction and need to be changed out between 60,000 to 90,000miles. On most engines if this belt breaks or slips interference will occur between the engine valves and the pistons damaging the engine. It’s best to stay on top of the affordable timing belt replacement as opposed to having a costly engine repair bill.

Please fill out the form below and we will contact you to setup the appointment.